This is a little more macro/money than much of the stuff I post here but it seems to be something people miss sometimes. The Federal Reserve drastically lowered rates in response to the unfolding financial crisis in 2008 and later. Those rates remain low today, essentially set between 0.0 and 0.25%. Despite this range the rate is effectively staying at or below 0.1%, but that is not what I am addressing today.

While these nominal rates are low by any standard (historical or current), the real rate; nominally less than the rate of inflation, tells an even more important story. 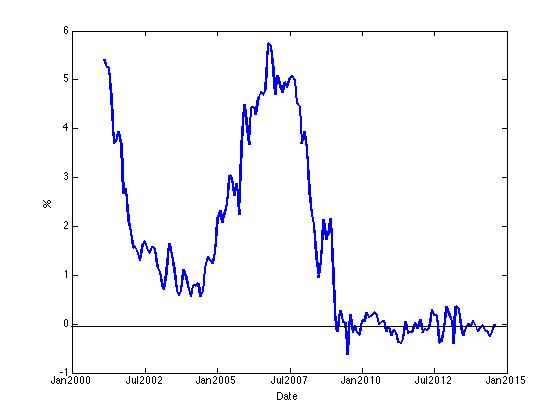 Many times over the last few years the real fed funds rate, the key monetary policy rate, went negative. What is important about this? Consider what a negative interest rate represents. The lender receives less money than he gave the borrower when there is a negative real rate. (Of course the lowest nominal rates go is 0%, so what we are talking about is more a measure of purchasing power.)

Why do I bring this up now? There is a great deal of discussion about whether the Federal Reserve is losing control of inflation or inflation expectations. Neither seems likely right now. What is the argument in favor of this view? We have seen some increases in inflation in recent months, though nothing so large as to make this risk a certainty. This argument is made all the more problematic by the fact that the people making the claim now have been making the same claim for five years or more. A stopped clock is right twice a day, which is a far better record than many making these claims right now.

Their argument is that rates so low for such a long period of time must generate inflation. And in the absence of any other factors they might be right. However we have seen a drop in consumer demand over this time period, increased unemployment as well, which both work against inflation.

The more troubling part of this for me is the suggestion that the Fed could be losing control of inflation expectations. The Fed has the ability to raise rates to quell inflation concerns. Does this create concerns about economic growth and employment growth? Potentially. However, we cannot have it both ways in this situation. The economy has been slower to recovery than most expected, so the notion of a free lunch with growth and lower employment without any economic negative seems a dream.

The arguments at the Fed are also typical of a policy transition time. The level of support has to be withdrawn at some point. When to change course is always hotly debated. In the end, though the attention paid is extreme, this situation seems to be playing out at the Fed much like any other recovery where policy attempted to soften the economic effects of a crisis.