THE TRUTH HURTS: Denver’s real unemployment rate, like Colorado’, is much higher than the official published figured would indicate.

If only it were so.

The situation is even more disconnected in Denver.

First, here’s the nominal unemployment rate of Denver, as reported in most of the media:

Denver has been on a nice, downward trajectory since early 2010, and we’re almost back to pre-recesssion levels. (Note: seasonally-adjusted numbers for Denver are not available through the CDLE site, which is why the seasonality is so evident here, and so absent in the Colorado charts.)

Unfortunately, as with the state as a whole, the number of jobs hasn’t kept pace with the population growth:

Since the previous peak of employment, in 2008, Denver has 15,000 more jobs, but around 90,000 more people. So why is the unemployment rate down? Because a smaller percentage of the population considers itself part of the labor force: 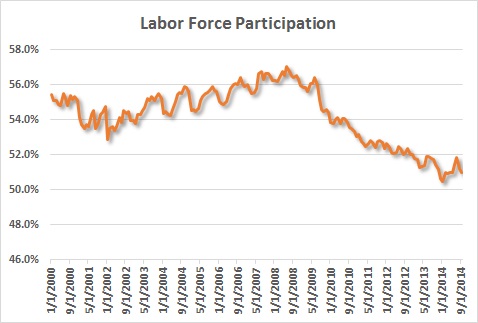 Prisons committee calls for firings of employees and major reform