Over the weekend the Fargo Forum published an editorial calling for the reinstatement of an assault weapons ban that was as shallow as it was myopic.

“There is no legitimate civilian use for guns like the AR-15,” the paper writes.

There are millions upon millions of Americans who own AR-15 rifles, and equivalent firearms, who might disagree with that statement.

Regardless, someone should inform the folks on the Forum’s editorial board that rights don’t work that way. You don’t need to justify keeping and bearing an AR-15 any more than you need to justify the content of your free speech. I suspect the journalists at the Forum would be apoplectic over the suggestion that they justify the type of speech they choose to publish before they are legally allowed to publish it, and they’d be right to be.

[mks_pullquote align=”left” width=”300″ size=”24″ bg_color=”#ffffff” txt_color=”#000000″]The New York Times compiled a list of the weapons used in the 19 most recent mass shootings. Less than half of them – just 42 percent – involved a rifle. The deadliest school shooting in U.S. history – the Virginia Tech massacre which saw 32 killed and 17 injured – was perpetrated with two hand guns.[/mks_pullquote]

Yet why do we not afford gun rights the same level of respect? Keeping and bearing arms, much like speech, is a civil right.

“We should revive the assault rifle ban. It is not a cure-all, but it is a start,” the paper continues.

But did the assault rifle ban in place from 1994 to 2004 really, you know, work? It’s legacy as a deterrent to gun crime is dubious, if we’re being generous. Even if we were really able institute a ban on certain types of firearms again in 2018, it would likely be even less effective given the internet as a venue for not only buying guns but modifying the weapons as well. There is much demand for banning bump stocks, for instance. That device was used by the Las Vegas shooter to increase his rate of fire. It’s not a very complicated thing.

If they were banned, building one would be a cinch for anyone with a modicum of mechanical ability and perhaps some guidance from the internet.

The Forum editorial ties a cause-and-effect relationship between the expiration of the assault weapons ban to the rise of mass shootings. “It’s easy to forget, with all the blood that’s been spilled since, that assault weapons were banned in the U.S. in 1994, but the law was allowed to expire in 2004. Mass shootings have only escalated in the years since,” the paper writes.

Yet we saw no fewer than seven mass shootings during the duration of the assault weapons ban according to data collected by the L.A. Times, including the infamous Columbine school shooting which has spawned dozens of copycats according to research done by Mother Jones.

What’s more, it’s not even clear that banning assault weapons would impact mass shootings all that much. The New York Times compiled a list of the weapons used in the 19 most recent mass shootings. Less than half of them – just 42 percent – involved a rifle. The deadliest school shooting in U.S. history – the Virginia Tech massacre which saw 32 killed and 17 injured – was perpetrated with two hand guns.

Which brings me to the point of my rebuttal to the Forum’s editorial. Attacking the how of mass shootings is a fool’s errand. Nothing short of an outright police state is likely to stop those intent on slaughter. A more fruitful line of inquiry, I believe, is to ask why these attackers – mostly men – perpetrate these crimes.

We’ve seen an increased incident rate in mass shootings in America, certainly, but it’s worth remembering that those incidents are happening in an overall environment of declining violent crime. These graphs from the Pew Foundation show just how sharply crime has fallen: 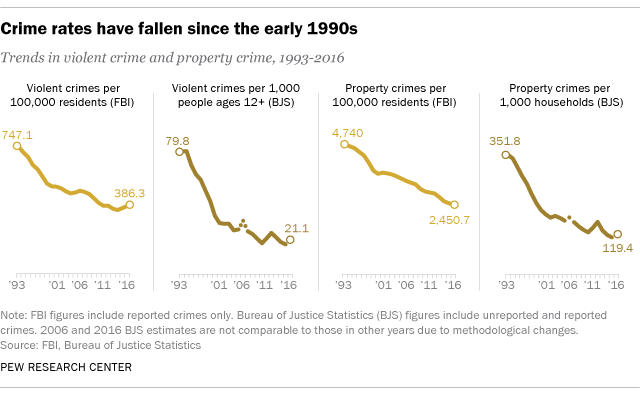 Also per Pew, gun violence specifically is on the decline:

Keep in mind that these declines – in overall violent crime and in gun violence, specifically – have happened despite an overall loosening of U.S. gun laws. The trend in state legislatures, in Congress, and in the courts has been toward a more permissive gun laws. If those who think gun control is a useful antidote to crime and violence are right, why do the aforementioned trends exist?

Again, what we have is an increase in a very specific sort of violent crime – the mass shooting – amid an overall decline in American violence. I’d rather we tackled the why of that than having yet another rote, unfruitful mud-slinging contest about gun control.